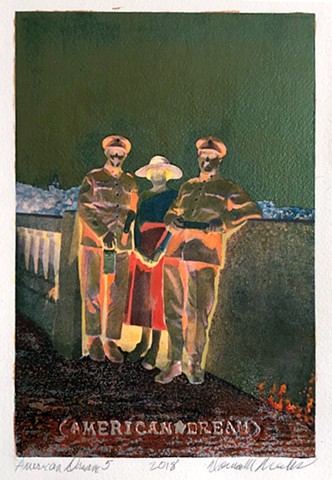 Begun in 2017, the (American Dream) series is based on selected family photos from the early decades of the twentieth century. The work attempts to mine intersections of the everyday and history in time. Work in this series combines inkjet transfers with water-based media on rag paper.

On a day in August 1920, Antoinette Pearl Baker, my grandmother, and whomever is holding the camera came to "our field" to meet the WWI flying aces Eddie Rickenbacker and Bert Acosta. She is dressed up. They are pictured with the tools of their trade, maps and a navigation box.

The accompanying photo of the plane has an inscription on the back. It reads, “(privately owned) Has just finished a coast to coast mail trip with Pilot Acosta – Capt Rickenbacker & Mr. Larson – These pictures taken at our field –.” The field was the nascent Bowman Field in Louisville, Kentucky, where a local aviation enthusiast had leased federally confiscated land in 1919.

On July 29th, 1920, three JL-6 planes left New York to fly to California to establish the initial airmail routes. Acosta and Rickenbacker's plane landed in Durant Field in Oakland, California on August 9th, 1920. After landing in Chicago on the way back, promotional flights to area cities took place. This original photograph documents one of these shorter flights.